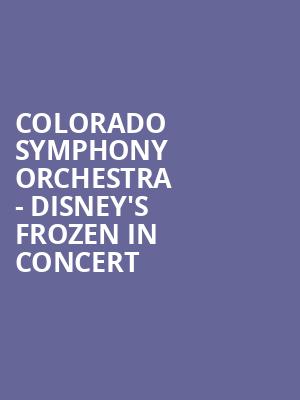 Photo by Aaron Burden on Unsplash

a tale of two sisters

The Colorado Symphony Orchestra brings the magic of Arendelle to Boettcher Hall this holiday season with this magnificent live-to-film concert of Disney's chilly super hit! With conductor Susie Seiter at the podium and the Colorado Symphony Chorus on hand, it's time for you and the little ones to Let it Go and enjoy the movie like never before!

What is the story?

Loosely based on Hans Christian Anderson's fairytale The Snow Queen, the story takes place in the Scandinavian surrounds of Arendelle, where two royal sisters, Elsa and Anna must grow up alone after losing their parents in a tragic sea accident.

Elsa, the elder of the two, must also contend with a secret - she has the power to create ice and snow with her bare hands, which she must keep secret, even from her sister, who nearly died whilst playing together as a little girl. By contrast, Anna is a sunny, albeit naive young lady who yearns for the outside world, having been isolated from Elsa since the accident.

When Elsa comes of age, she must take the throne as Queen, and the kingdom is reopened for her coronation - just for one day. Anna meets a handsome and charming Prince called Hans, who she instantly wishes to marry, much to Elsa's consternation. When the argument inadvertently reveals Elsa's powers, she flees to the wild North Mountain to live out a life of solitude and freedom. But Anna must find her sister and bring her back (with the help of an ice-seller, his reindeer and a talking snowman); otherwise, the fate of Arendelle will be frozen forever and left to the mercy of a cruel power.

Sound good to you? Share this page on social media and let your friends know about Colorado Symphony Orchestra - Disney's Frozen in Concert at Boettcher Concert Hall.