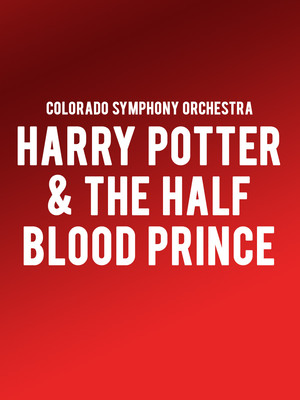 Colorado Symphony Orchestra - Harry Potter and the Half Blood Prince

See the epic sixth instalment with a live score

Why See Colorado Symphony Orchestra - Harry Potter and the Half Blood Prince?

Calling all wizards, witches and muggles alike, the Colorado Symphony Orchestra presents a screening of the sixth Harry Potter movie, and they'll be playing John William's and Nicholas Hooper's scores live in accompaniment.

Released in 2009, this thrilling adventure sees the forces of Lord Voldermort growing ever stronger, and wreaking havoc in both the magical and muggle worlds. Does a book that Harry discovers marked as 'property of The Half Blood Prince' hold the key to turning the tide against his arch enemy? Opening with a visually stunning attack on London's Millennium Bridge, and featuring new cast member Jim Broadbent as potions master Horace Slughorn, The Half Blood Prince is one of the franchises most accomplished entries, laying the groundwork for the epic finale to follow.

Sound good to you? Share this page on social media and let your friends know about Colorado Symphony Orchestra - Harry Potter and the Half Blood Prince at Boettcher Concert Hall.