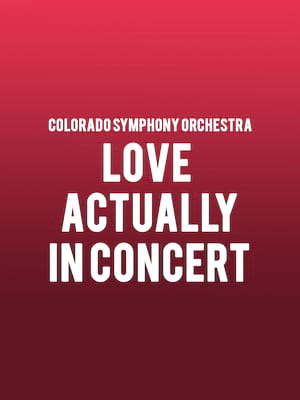 It takes a lot to become a new Christmas classic, so it's doubly impressive that Love Actually managed to enter that pantheon while also holding the distinction of being one of the most divisive holiday movies ever made.

It's been 16 years since Richard Curtis' Christmas rom com Love Actually hit cinema screens, turning into an instant cult classic that continues to be a staple come the colder months. In the tradition of fellow British masterpieces Bridget Jones' Diary, Four Weddings and a Funeral and Notting Hill, its tales of yearning, first love, heart break and reconciliation are filled with charm, whimsy and sweetness that makes them perfect festive-viewing fodder.

Don't miss out when the Colorado Symphony performs the Love Actually score, including its early 2000s pop anthems, alongside a special live HD screening of the film. It'll be nigh impossible not to fall under the spell of its eight intertwining lovelorn stories and winning performances from an ensemble cast including the late Alan Rickman, Emma Thompson, Hugh Grant, Kiera Knightley and Liam Neeson, with orchestral romance to boot!

Sound good to you? Share this page on social media and let your friends know about Colorado Symphony Orchestra - Love Actually in Concert at Boettcher Concert Hall.