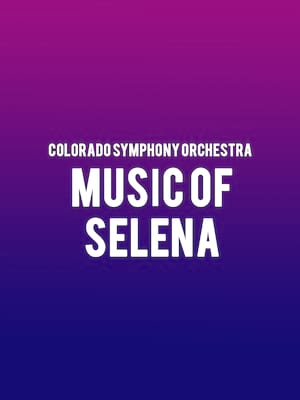 What made Selena's music cutting-edge, however, was her fusing of traditional Tejano with cumbia, a percussion-driven musical style from Colombia.

A Touching Tribute To The Queen Of Tejano

One of the most celebrated Mexican-American performers in music history, Selena Quintanilla defined the phrase pop star with her undeniable charisma, soaring vocals and timeless beauty. Taken from the world too soon by an overzealous fan, the 'Queen of Tejano Music' crossed language boundaries and paved the way for the Latino performers of today. Celebrate the late diva's sonic legacy with the Colorado Symphony and its resident conductor Christopher Dragon when they pay homage during The Music Of Selena concert, in partnership with the Mexican Cultural Center.

Backed by the world class orchestral ensemble, up and coming Mexican-American vocalist Isabel Marie Sanchez steps into Selena's shoes to perform Spanish-language and crossover classics like No Me Queda Mas, Bidi Bidi Bom Bom and I Could Fall In Love. Winner of reality TV talent competition La Voz Kids, the performer is currently signed to Q-Zone Records, the label owned by Selena's own father Abraham Quintanilla.

Sound good to you? Share this page on social media and let your friends know about Colorado Symphony Orchestra - Music of Selena at Boettcher Concert Hall.