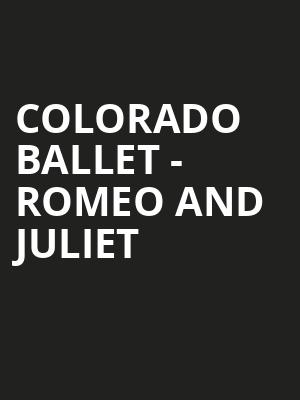 These violent delights have violent ends

Did my heart love 'til now?

Ever since William Shakespeare put quill to paper to create the tragic tale of two lovers caught in a violent crossfire between their warring families, Romeo and Juliet has captivated anyone who has read it or seen it on the stage or screen. When translated into the language of ballet, a new beauty is apparent for the viewer as the world of the Capulets and Montagues is brought to life. Don't miss Colorado Ballet's production of Prokofiev's breathtaking 1935 adaptation, with choreography by Derek Deane.

IN FAIR VERONA WHERE WE LAY OUR SCENE

The city of Verona is in turmoil, the constant fighting between two families, the Montagues and the Capulets creates chaos wherever they meet, often leading to deadly skirmishes that batter both sides. It is against this backdrop that Juliet, the youngest daughter of the Capulets meets Romeo, a dashing Montague. Unknown to none but their closest friends, they begin a secret relationship that threatens to be the very undoing of not just them both, but their families and friends alike.

Seen Colorado Ballet - Romeo and Juliet? Loved it? Hated it?

Sound good to you? Share this page on social media and let your friends know about Colorado Ballet - Romeo and Juliet at Ellie Caulkins Opera House.