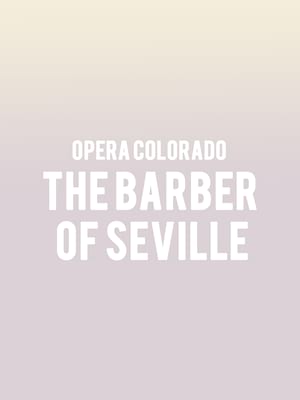 Opera Colorado - The Barber of Seville

Why See Opera Colorado - The Barber of Seville?

Experience all of the rampant punchlines, hilarious hijinks and beloved music of Rossini's opera buffa masterpiece The Barber of Seville, set to take over the Ellie Caulkins Opera House during Opera Colorado's hotly anticipated 2019 revival. Featuring some of the composer's most memorable tunes, the rapid-fire tale of bribery, deception and disguise is given an offbeat Art Deco makeover, adding a whimsical flair to the madness, mischief and mastery of the beloved classic.

Sequel to the rib-tickling Marriage Of Figaro, the story revives the familiar Comedia Dell'Arte characters and fuses them with soaring vocal acrobatics, much musical with and of course, no-holds-barred comedy, culminating in a grand farce. It chronicles the escapades of Count Almaviva, a Spanish nobleman that falls deeply in love with Rosina, the beauteous ward of Dr Bartolo, an old doctor who plans on marrying her himself. Enter Figaro, the inimitable barber, who endeavours to help Almaviva win over his new love, resulting in much comic confusion.

Thoroughly enjoyed this performance and was not going to review it until... more

John Soister: “"The Barber of Seville" one engaging success!”

As I remarked (to just about anyone/everyone I bumped into after the performance),... more

Sound good to you? Share this page on social media and let your friends know about Opera Colorado - The Barber of Seville at Ellie Caulkins Opera House.