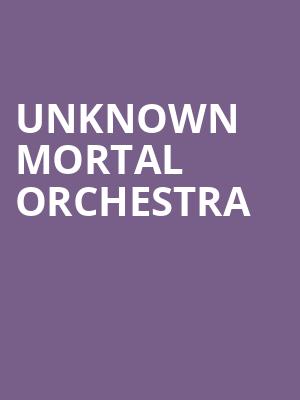 On their fourth album, 'Sex & Food', you'll be relieved to know that they're thrown themselves into another bold new direction for a set of fuzzy, funky and fun set of songs that'll be rattling around your head all summer long.

The brainchild of New Zealand-based singer songwriter Ruban Nielson and bassist Jake Portrait, Unknown Mortal Orchestra first introduced the world to their kaleidoscopic vision with the release of their critically acclaimed self-titled debut album in 2011. It's lo-fi-drenched, experimental flights of fancy evolved to become their trademark neo-psychedelia over the course of their subsequent albums, and now sees them hitting the road in support of their forthcoming double album.

Imparting an intense social commentary on the state of the world in their lyrical content, the outfit blends otherworldly folk with a shellshocked sense of soul-infused funk, shape-shifting between grooves and riffs to carve their own niche in the paths well-trod by the likes of Tame Impala and the like.

Sound good to you? Share this page on social media and let your friends know about Unknown Mortal Orchestra at Ogden Theater.