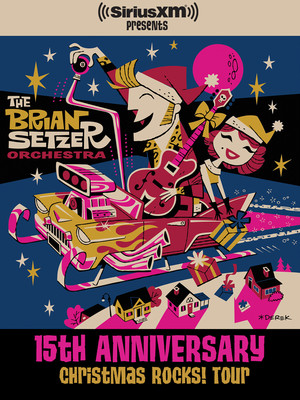 The 17th anniversary tour of this swingin' Christmas concert extravaganza!

NOW IN ITS seventeenth YEAR OF TOURING!

Ex-Stray Cats frontman Brian Setzer is one of those geniuses who keeps the Earth properly spinning on its axis through his wildly innovative guitar-playing and off-beat humor. Launched in the 1990s, the Brian Setzer Orchestra is an 18-piece swing and jump blues band made up of Setzer himself (natch) as well as a whole cacophony of talented musical accomplices.

The BSO's Christmas Rocks! tour is an annual extravaganza of the band's top hits as well as classic Christmas songs, plus inspired guitar work by Setzer himself. Expect a wild evening from one of music's great guitarists and vocalists. Now in its 17th anniversary year, the 2019 tour promises to be a huge celebration of the band's success!

A must-see for fans of big bands, jazz, and rockabilly, this Christmas show harks back to the heady days of rock and roll!

Suitable for the whole family

Brian & his orchestra ROCKED from the moment they took the stage to the... more

Best concert I've ever been to. Brian's music is so good and clean. He... more

Sound good to you? Share this page on social media and let your friends know about Brian Setzer Orchestra: Christmas Rocks at Paramount Theater.