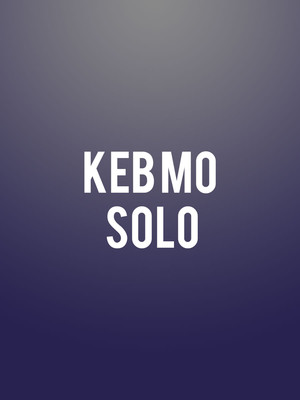 It is a testament to Keb' Mo's personality, both in his singing, playing, lyricism, and the short retorts to the audience between songs, that he is all about the music

Described as a conduit for the historic Delta blues that flowed up the Mississippi river and found its way to stages across America, legendary bluesman Kevin Roosevelt Moore AKA Keb' Mo' was raised on gospel and the blues, a lifelong love that blossomed into an accomplished guitar skill from a young age. Don't miss the 'Rainmaker' hitmaker and his lightning fast yet soulful fretwork during this special solo stripped-back show.

Since picking up the guitar as a youngster, Keb' Mo' has proven himself to be one of the modern masters of the blues and contemporary Americana, both as an accomplished frontman and sideman. Channeling the spirit of Robert Johnson at those mythical crossroads, he offers up a high standard of virtuosic musicianship and lyricism, especially when it comes to live performances. Not only is he incredibly skilled when it comes to guitar, but his melodic playing is underpinned by bright brassy vocals that always have a story to tell.

Sound good to you? Share this page on social media and let your friends know about Keb Mo Solo at Paramount Theater.