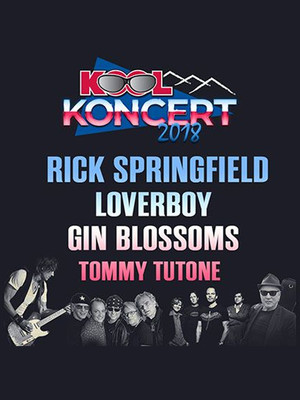 When Australian heartthrob Rick Springfield first sang her praises in 1981, the world responded resoundingly to his impassioned plea and pulse-quickening music. Jessie's Girl would top the singles charts and earn a Grammy Award for best male rock vocal

The Biggest Kool Koncert Yet

Supplying Denver's radio waves with its daily dose of classic hits, Kool 105 has set the date for their annual Summer celebration and intends on making it the biggest party the city has ever seen, with a star-studded lineup to match! Opening the show is California new wave quartet Tommy Tutone, followed by Hey Jealousy hitmakers the Gin Blossoms, Canadian classic rockers Loverboy and last but by no means least living power pop legend Rick Springfield.

Whilst his classic good looks, chart-topping, radio friendly anthems and rock 'n' roll swagger marked him as a teen idol heartthrob, Springfield's expertly crafted mainstream pop has withstood the test of time, affording him a stellar career spanning a prolific 16 studio albums and multiple reinventions in his later life. Celebrate his extraordinary Grammy-winning legacy whilst singing along to hits like Jessie's Girl, Love Somebody and Affair Of The Heart!