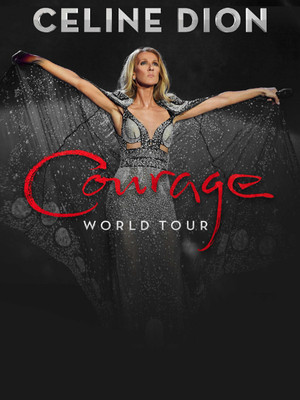 Celine Dion is back!

French-Canadian chanteuse Celine Dion is leaving Las Vegas and bringing the show to you this year on this extensive world tour, her first in over ten years! The comeback we've been waiting for, the Courage tour will also be accompanied by a brand new record of the same name!

Bombastic, emotional and entirely unique, Celine Dion's approach to a ballad is iconic, with hits like the Titanic theme 'My Heart Will Go On', 'All By Myself' and 'The Power of Love' smashing chart records worldwide.

Initially finding success back in 1982 in her native language, in 1990 she released Unison, her first record in English, subsequently becoming one of the globe's biggest dual-language vocalists. Since then she's put out 26 studio albums in French and English, with the upcoming Courage becoming the 27th and her first English release since 2013.

So, get ready for perfection when the consummate performer steps out of her 16 year run at Ceasar's Palace and into an arena near you!

Truly one of the best concerts that I have ever seen. Right up there with... more

Sound good to you? Share this page on social media and let your friends know about Celine Dion at Pepsi Center.