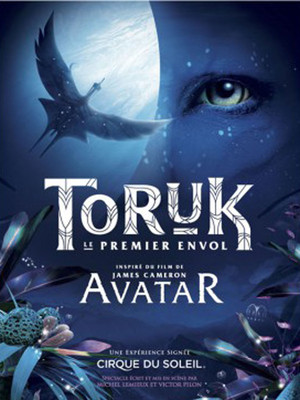 THE RECORD-BREAKING MOVIE GETS A CIRQUE MAKEOVER

The newest show by renowned circus impresarios Cirque du Soleil, Toruk takes its inspiration from James Cameron's blockbusting movie, Avatar. Set on Pandora thousands of years ago before Jake and Neytiri met to overturn the moon's colonisation, the Toruk was the king of the sky, free and without a rider. - until he gains his first Na'vi master. A must-see for fans of the record-breaking movie, and for Cirque fans alike, this is one extravaganza you've never seen before.

If you've seen the movie you'll already know that the word Toruk refers to that red and orange predator that Jake conquered in order to lead the Na'vi tribe. Whoever is able to tame the creature decides the destiny of all the tribe, which is central to their religion and beliefs. Call this show a prequel to the film; here we find out who this first rider is, and how their actions shape the destiny of the Na'vi clan for the next generations on Pandora.

The 2009 epic science fiction film created by James Cameron forms the backdrop of this new production, and starred Sam Worthington, Zoe Saldana and Sigourney Weaver. Set in the mid-22nd century, the action takes place on a lush moon called Pandora in order to mine the precious metals there; but at the expense of the local tribe of aliens, the beautiful, catlike Na'vi.

The movie is renowned for its special effects, especially the use of motion-capture for the Na'vi characters, and the illuminous, dreamlike scenery that left people pining long after they left the movie theaters.

Please note that the performances at Centre Bell in Montreal are in French, apart from the 4pm shows on Dec 23 & 28, which are in English.

amazing is all I can say, never saw Avatar so had no preconception of what... more

In teaming up with James Cameron, Cirque du Soleil has won a massive marketing... more

Sound good to you? Share this page on social media and let your friends know about Cirque du Soleil - Toruk at Pepsi Center.