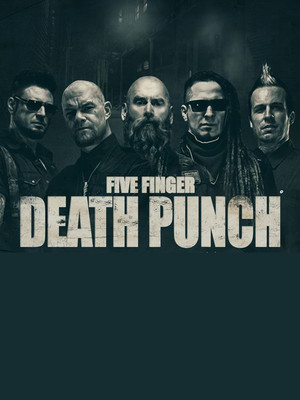 This Event Has Been Suspended Until Further Notice

The ferocious metal band are back!

THIS EVENT HAS BEEN SUSPENDED UNTIL FURTHER NOTICE

Suspended: This performance has been suspended. We will update this page once we have more information.

A Punch to the Gut

As the name suggests, Five Finger Death Punch aren't your grandmother's band. Named after the nifty and deadly martial arts technique in Tarantino's Kill Bill, this heavy metal fivesome formed in Las Vegas in 2005 and have been climbing the metal ranks ever since. Led by vocalist Ivan Moody, Five Finger Death Punch are renowned for their ferocious stage presence and expert blending of thrash, alt rock and classic metal elements.

Heading out on quite a trek in 2020 in support of their eighth album 'F8', don't miss these hard rockers live alongside special guests!

I've seen almost 10 shows this summer and by far this is the best overall... more

Sound good to you? Share this page on social media and let your friends know about Five Finger Death Punch at Red Rocks Amphitheatre.