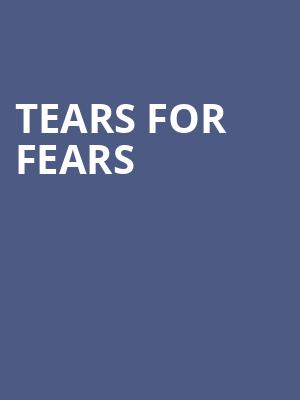 We are looking forward to playing our favorites from the new album as well as our classics from throughout the years.

Why See Tears for Fears?

Everybody Wants To Tour The World

Hot on the heels of the announcement of their upcoming record release - the phenomenal 80s icons' first in 17 years - Tears for Fears will also be heading on a worldwide trek to support it. Titled The Tipping Point and due to be hitting the airwaves in February 2022, it will be the band's 7th studio album. Hitting the states a few months later, they'll be bringing it straight to you, alongside the synth-pop perfection of hits like 'Shout', 'Mad World,' and 'Everybody Wants to Rule The World'. With special guests Garbage!

Famous sons of the picturesque city of Bath, England, Tears for Fears were formed in 1981 and are made up of Roland Orzabal and Curt Smith. Riding the 80s electronic explosion, they gained global recognition in 1985, with second LP, Songs From The Big Chair. Now synonymous with the new wave, the duo's synthesizer-laden pop combined with vulnerable honest lyrics, has proven not only highly influential but still remains as transporting as ever.

Seen Tears for Fears? Loved it? Hated it?

Sound good to you? Share this page on social media and let your friends know about Tears for Fears at Levitt Pavilion Denver.