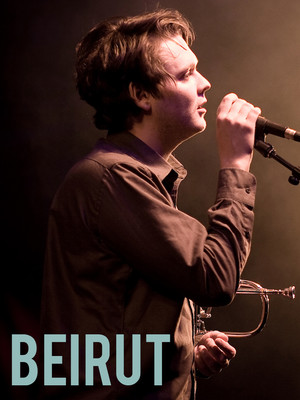 Beirut are the encapsulation of a musical wanderlust that has taken Condon from Balkan folk to French chansons through to Mexican and Hispanic sounds. The brass section - fronted by Condon on trumpet - is pivotal, with more euphoria spreading around the

A world music-influenced indie-rock band, the band started in a teenager's bedroom in New Mexico. That former teenager, multi-instrumentalist and frontman Zach Condon, is now joined by members Perrin Cloutier, Nick Petree, Paul Collins, Kelly Pratt and Ben Lanz. 2019 sees them back on the road in support of their 5th record, Gallipoli.

Combining upbeat singable pop with the old-world feel of Balkan Gypsy Folk music, accordion, brass and strings meld perfectly the subtle theatricality of Condon's melodious voice and the delicate strains of his ukulele. Their music is uplifting and danceable, evoking a hazy Summer spent in charming European climes.

Seen Beirut? Loved it? Hated it?

Sound good to you? Share this page on social media and let your friends know about Beirut at Ogden Theater.