Sorry! You missed Bowling for Soup and Reel Big Fish at Ogden Theater 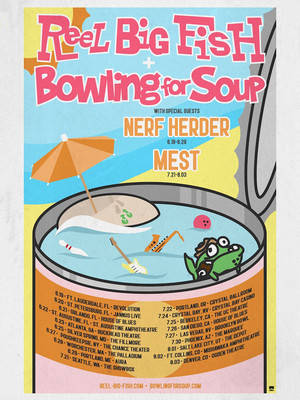 Aaron from Reel Big Fish and I decided we were going to make it happen. And we did! I could not be more excited for this summer.

Why See Bowling for Soup and Reel Big Fish?

A match made in punk rock heaven

Calling all punk rock fans! Get ready to throw up your rock hands and break out your best skanking shoes for this super awesome co-headlining tour as two of the biggest names in ska and punk rock hit the road this summer together - for the first time ever.

Alongside special guests Nerf Herder (6/19 - 6/ 29) and MEST (7/21 - 8/03) these two '90s and '00s titans will be bringing the noise on an extensive jaunt one that Jarret Reddick of 'Bowling promises to be 'Two of the most fun bands on the planet together at last. People will have sore faces from smiling after this one.' We can't wait!

If you need a dose of unpretentious, instantly catchy pop-punk, then there are few better bands to see than Bowling for Soup. The quintet formed in the 1990s, and spent much of the decade cultivating a small but loyal following as their contemporaries (Green Day et al) took over the world. Bowling for Soup's time to shine on the big stage finally arrived in 2002 with the release of their fourth record Drunk Enough to Dance, which contained the monster hit single 'Girl All the Bad Guys Want.'

The go-to ambassadors of Ska punk for 28 years, Reel Big Fish burst on the mainstream with 1997's Sell Out, defining the genre's Third Wave. Known for their high-energy stage presence and ability to get even the grumpiest concertgoer on the dance floor, they've enjoyed a cult following that keeps them out on the road year on year. Riding high off their latest release, Life Sucks...Let's Dance, their first album since 2012, the band, led by Aaron Barrett are truly the scene's living legends!

Seen Bowling for Soup and Reel Big Fish? Loved it? Hated it?

Sound good to you? Share this page on social media and let your friends know about Bowling for Soup and Reel Big Fish at Ogden Theater.