You are viewing a past performance of Rjd2

You can catch Rjd2 at the Boulder Theater, showing December 3, 2020 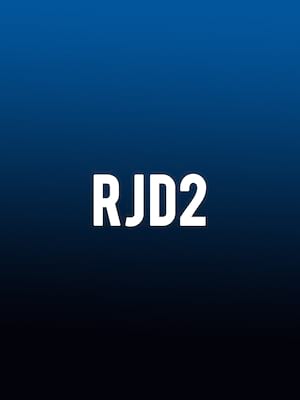 Rjd2 maintains a stylistic consistency while oscillating emotions and moods at the drop of a hat, and that its ability to capture the various hues that comprise life's mosaic is a rare thing to find in today's music.

First rising to attention as the DJ/producer for Columbus-based rap outfit Megahertz in the late 90s, Ramble John Krohn AKA RJD2 emerged as a solo force to be reckoned with just a few years later. Hailed as one of the greatest underground hip hop releases of 2002, his debut album Dead Ringer placed him alongside contemporaries DJ Shadow, Moby and DJ Spooky.

Eleven albums and two decades later, RJD2 has not only cultivated a reputation as one of the world's finest producers, but also one of the best live DJ performers on the planet. Thanks to an innovative spirit and relentless drive to experiment, his concerts often feature live bands, soaring digital orchestrations, old school vinyl scratching, soulful vocal samples and atmospheric funk.

Seen Rjd2? Loved it? Hated it?

Sound good to you? Share this page on social media and let your friends know about Rjd2 at Ogden Theater.