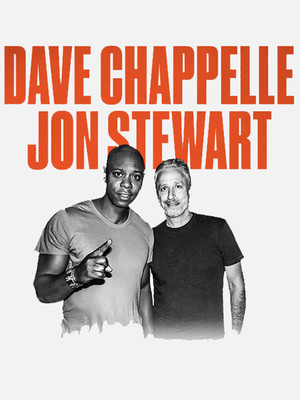 Two comedy giant in Morrison, for one night only!

If you're still grieving over the loss of Jon Stewart from the late-night TV comedy line up, then get ready to laugh until you cry - he's coming to Morrison! But it gets better... he is being joined by comedy legend Dave Chapelle! After their joint tour last year the duo head to Colorado for a one-off gig that is sure to leave you laughing all the way home.

After gracing us with his presence on the Daily Show for 16 years, in 2015 Jon Stewart stepped down. Since then, Stewart has mainly remained off-stage - only occasionally popping up on the show (which he is executive producer of) 'The Late Show with Stephen Colbert', and in 2017 he famously featured on one of Chappelle's sets at Radio City Music Hall.

Make sure you don't miss out on the experience of seeing Dave Chappelle and Jon Stewart doing what they do best, making their audience laugh!

Seen Dave Chappelle and Jon Stewart? Loved it? Hated it?

Sound good to you? Share this page on social media and let your friends know about Dave Chappelle and Jon Stewart at Red Rocks Amphitheatre.