Sorry! You missed My Morning Jacket at Red Rocks Amphitheatre 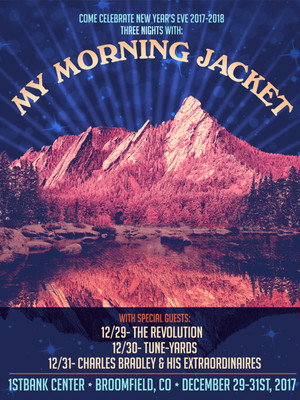 Why See My Morning Jacket?

Now established as one of the great modern alt-rock bands, My Morning Jacket have built up their fanbase steadily over the years.

Founded in 1998 by Jim James following the breakup of his band Winter Death Club, My Morning Jacket has built a solid reputation for their wide palette of rock styles from classic rock, country, soul and psychedelia. The name of the collective has its own interesting roots too. It was named after a discarded and battered coat that James spotted the morning after his favorite bar had burned down; the jacket in question that he found whilst surveying the damage had the initials MMJ embroidered on it.

Known for their live, enthusiastic live performances, the band are favorites on the spring/summer festival circuit, and are also keen philanthropists, often donating percentages of their ticket sales to local causes.

Seen My Morning Jacket? Loved it? Hated it?

Sound good to you? Share this page on social media and let your friends know about My Morning Jacket at Red Rocks Amphitheatre.