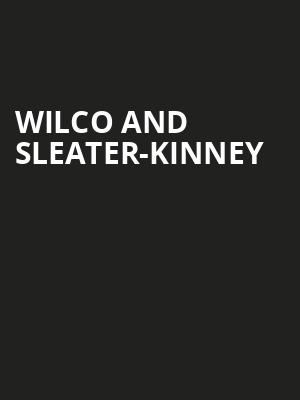 Sleater-Kinney still do punk rock better than anyone

Why See Wilco and Sleater-Kinney?

In Summer 2020, two indie rock giants join forces for the hotly anticipated coast to coast It's Time Tour. Following the release of their 11th studio album Ode To Joy, Wilco co-headline the jaunt with Riot Grrrl pioneers Sleater-Kinney. Since forming in 1994, Wilco have amassed one of the most respected catalogs in modern American rock. With songwriter Jeff Tweedy at the forefront, the band has successfully dabbled in Americana, folk and even electronica over the course of its storied career.

There are few more impressive sounds in rock than Sleater-Kinney at full throttle. Comprised of Carrie Brownstein and Corin Tucker, the band honed their assault of dueling vocals and guitar ferocity over the course of a decade, beginning with their self-titled debut and ending with 2005's The Woods. The group went on hiatus, with all three original members pursuing their various solo projects (Wild Flag, Portlandia, Corin Tucker Band) until the 2019 release of their triumphant ninth studio album The Center Won't Hold.

Seen Wilco and Sleater-Kinney? Loved it? Hated it?

Sound good to you? Share this page on social media and let your friends know about Wilco and Sleater-Kinney at Red Rocks Amphitheatre.