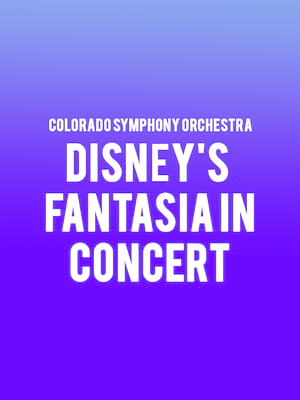 This is a bold work that seeks to educate its young audience about classical music. But it is also playful and delightfully imaginative.

Take a nostalgic trip into cinema land with the Colorado Symphony Orchestra during Disney's Fantasia In Concert, a live HD screening of special selections of groundbreaking orchestral score-score infused animations from the Disney canon. Taken from both the 1940 and 1999 versions of Fantasia, these pieces include Beethoven's soaring Fate Symphony (Symphony No. 5), Tchaikovsky's Nutcracker Suite and Goethe's-poem turned on-screen adventure The Sorcerer's Apprentice.

A groundbreaking marriage of animation and sound, the original 1940 film was Walt Disney's very own love letter to classical music. One of the most lavishly produced and elaborate animated features ever produced, thanks to its innovative use of Fantasound, a stereophonic sound system created expressly for the project. This was used to create 'music you can see and pictures you can hear', a dazzling cinematic spectacle that has been cherished by fascinated audiences ever since its release.

Sound good to you? Share this page on social media and let your friends know about Colorado Symphony Orchestra - Disney's Fantasia In Concert at Boettcher Concert Hall.