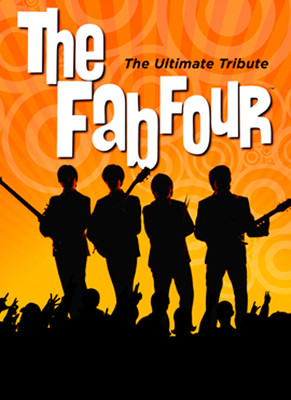 The Fab Four - The Ultimate Tribute

If you have never experienced a Beatles tribute act before you really should drop your inhibitions and see the Fab Four. The Beatles had that special magic and charm and coupled with their talent as singers and songwriters there may never be anyone else

Why See The Fab Four - The Ultimate Tribute?

The Fab Four are one of the world's most in-demand Beatles tribute acts! They're note perfect and the attention to detail is so impressive, you'd be forgiven for thinking you were in the presence of the real thing. From mop-tops to Wings, let the Fab Four take you on a journey through the life of a band that still thrill, five decades after they split up!

The Beatles are one of those bands whose songs we all know; even if we've never learned them directly. The most innovative and revolutionizing quartet in musical history, their legacy lives on threefold, being the source of countless films, music, books and other media.

Founded in 1997, The Fab Four are made up of professional impersonators Ron McNeil, along with Ardy Sarraf, Rolo Sandoval, and Michael Amador, who have dedicated themselves to bringing audiences the very best of the Beatles. From Las Vegas to Japan, Liverpool to New Zealand, they have delighted the world with their pitch-perfect renditions of pop's most cherished songs and are an absolute must-see for Beatles fans old and new!

Seen The Fab Four - The Ultimate Tribute? Loved it? Hated it?

Sound good to you? Share this page on social media and let your friends know about The Fab Four - The Ultimate Tribute at Paramount Theater.